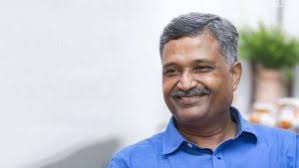 It is a matter of great pride for TDCA  that K N Ananthapadmanabhan ,fondly known as Kannan in the Trivandrum Cricket fraternity has been nominated to the International Panel of umpires by the ICC.Ananthan has always been a pride for the district as a player as a captain and as an umpire.

His contributions as a senior player and a coach has been of  great help to the upcoming players from Kerala particularly Thiruvananthapuram.